B03 “International Complementarities in the Development of National Welfare States: The Transatlantic Sphere 1870-2020” 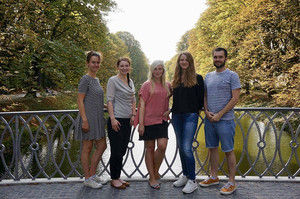 As part of the B03 survey in Mexico by the Cologne project team, we prepared a pre-analysis plan and registered it with EGAP. This possibility is used by more and more scientists to make experimental and academic work more transparent.
The Pre-Analysis Plan of the B03 project can be downloaded here.

Abstract:
We promote the argument that countries’ economic structural interdependence based on
trade relationships influence individual preferences for social policy programs. When a
central trading partner raises barriers in the form of increased tolls and tariffs it will increase
the perception of labor market vulnerability and economic risk. Subsequently, increased risk
perception should fuel different demands for different types of social policy reforms. Labor
market segmentation into formal and informal workers thereby moderates the impact of risk.
Our analysis contains two steps: the impact of changing trade relationships on individual
economic risk perception, and, subsequently, the effect of risk on social policy preferences.
To investigate the first part of the argument, we use a vignette experiment that primes
individuals about hazards of changes in current trade relationships between Mexico and the
U.S.. Next, we analyze how risk perception influences social policy preferences and how far
different redistribution coalitions arise. As workers embedded in notoriously permeable labor
markets not only frequently switch the sector of employment, but also share households with
a spouse who works e. g. in the informal sector, social policy preferences cannot be simply
derived from income level. Using a conjoint experiment that models the trade-off between
different social policies and different degrees of scope, level, and who pays for it, allows to
study the effect of increased risk perception and employment sector on policy preferences in
a more nuanced way. We study our argument with an experimental survey for the case of
Mexico in 2018.

The German Research Foundation (DFG) has approved a new Collaborative Research Centre (“Sonderforschungsbereich” = SFB) at the University of Bremen. The SFB will receive funding of around eleven million euros over the next four years. The University of Cologne is involved in the sub-project B03 of the principal investigator Dr. Sarah Berens. Dr. Berens is a research associate at the Cologne Center for Comparative Politics at the University of Cologne. Together with Prof. Dr. Philip Manow (University of Bremen), she is investigating the complementary development of social policy in several countries under the conditions of intensified global economic integration as part of the sub-project “International Complementarities in the Development of National Welfare States: The Transatlantic Sphere (1870-2020)”.

Contributing partners and members of the SFB

The Collaborative Research Centre is scheduled to be launched at the beginning of 2018.

Further information on SFB 1342 can be found here.

Subproject B03: International complementarities in the development of the welfare state: The transatlantic sphere (1870–2020)

The CRC comprises 16 projects and is divided into two sections. Projects in section A mainly rely on macro quantitative techniques to analyze and explain social policy dynamics in a global perspective. In the projects of section B, the mechanisms that link international interdependencies and national determinants to the spread, inclusiveness, and generosity of social policy dynamics are analyzed by applying qualitative and quantitative case study analyses.

In this subproject we investigate the complementary development of social policy in several states under conditions of intensified global economic interdependence. We focus on the relationship between transatlantic trade and social policy. We systematically investigate how the respective interests of voter groups and political parties arising from economic interdependencies translate into state policy according to political conflict and cooperation mechanisms and how they thus shape the specific institutional profile of the respective welfare states and political economies in the long term.

The subproject’s central research question is: To what extent has the horizontal economic interdependence between states in the Americas and Western Europe led to the formation of complementary welfare state regimes and political economies and which redistributive coalitions were behind these developments? Complementarity refers to differences in the institutional development of the political economies that are mutually interdependent. The central causal mechanism is the developing economic division of labour, which is politically reflected in different redistributive coalitions. The subproject will present these coalitions in a historical context with respect to political parties and in a contemporary context with respect to the electorate. The central topic of the subproject is: How, through the international division of labour, i.e. comparative cost advantages, do the institutions of the welfare state develop complementarily to each other – guided by political processes – and how do they mutually stabilize each other within their differences. We are thereby formulating a clear alternative explanation to that proposed, for example, by the convergence notion of modernization theory.

On the one hand, the subproject reconstructs the political and especially social and trade policy related reactions to crises in North America and Western Europe before the Second World War. Looking at the period after 1945, on the other hand the subproject expands its perspective to include the economic integration of South America and its industrialization strategy as well as current conflicts in trade policy. The investigation will focus on the interaction between – foreign trade-oriented – societal interest groups and their political mediation in the multiparty systems of Western Europe, the two-party system in the USA and the clientelistic presidential systems found in Latin America that all have different capacities to represent local versus “functional” interests. The aim of the subproject is to develop a concise theoretical framework that is compatible with the Varieties of Capitalism (VoC) approach and is valid for the reciprocally influencing formation of the West European, Latin American and North American welfare states. In doing so we can systematically extend an approach that previously focused on just Western Europe. Methodologically, we combine historical-comparative case studies, quantitative analyses at the macrolevel and survey data at the microlevel.

The project will offer two doctoral positions to support the analysis of historical parliamentary roll-call-vote data for the cases Mexico and Argentina and to conduct surveys in Mexico and Brazil. The call for applications will be out soon. The PhD positions are planned to start in May 2018. For further information, please contact sarah.berens@uni-koeln.de.

At University of Cologne: Franziska Deeg